Why did we start IT courses for Autism at Louis Center ? It started with a boy named Haziq...

Running IT related courses for children and teens with Autism has always been a part of our long term plan. This in line with our goal, that is, to make our children employable & independent adults.

However we did not expect to make this move as early or as sudden as it did.

How young Haziq expedited this long term goal of ours..

In 2016, we felt that we had to try it out with one of our students Haziq. He was 12 years old then. Like most teenagers, Haziq (who also has Autism), was going through a tough time regulating his behaviour.

His behaviour was becoming disruptive and negatively impacting himself, his family and his therapists.

Not Fully Understanding What Haziq Needed & Not Giving Up On Him

Having known Haziq and his beautiful family since he was 8, we refused to give up on him.

Haziq was not only great at art but also remarkably creative with his Lego and clay models. In addition he was doing well in literacy & numeracy.

Haziq was attending a special needs program (PPKI) that was run in the mainstream education school premise (in a separate classroom ) for a few hours in the morning and would come to Louis Center after that.

The biggest problem was that we had to guess what he wanted and try to figure out how he was feeling. Haziq was not great at communicating his needs and feelings (we are not talking about his basic needs, he was ok with expressing them).

We Needed to Step Out of The Box

Seeing Haziq regressing as time went by, isolating himself, looking sad and not wanting to participate in activities that he used to, my husband (a Child and Adolescent Psychiatrist) and I felt that we needed to change what we were doing and step out of the box for a bit.

Haziq's mum, a lovely and supportive lady frequently sent me pictures of the various models that Haziq used to build, using Lego and clay. During his break time at the centre, he would also indulge in this passion.

At first I bought him a graphics tab and a 3D designing pen which Ms. Usha (in the pic below), who is now in charge of the IT program, taught him to use. 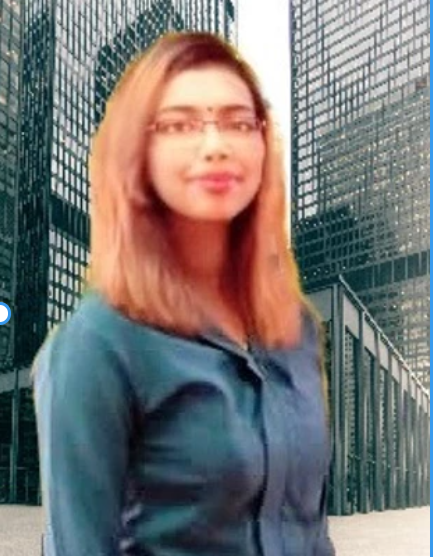 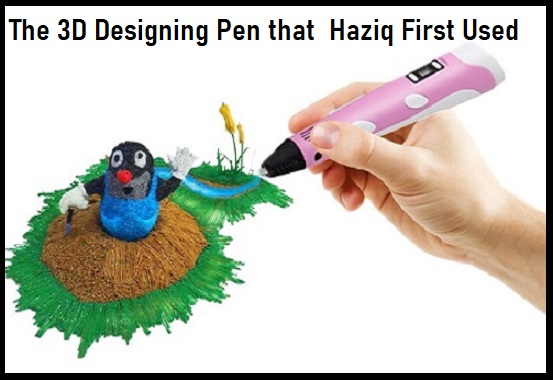 His parents also bought him a set to be used as a leisure activity at home. While he quickly mastered using these gadgets, and there was some improvement in his behaviour, we still felt that we were missing something.

Looking at Haziq’s creativity and his love for creating 3D models with his hands, I thought that he might do well in 3D Designing.

At the same time, I also felt that he might not be interested in working with us, if his creations remained only on the screen.

He would need to be shown that his designs “could come to life”.

So our only option was to buy a 3D printer for Haziq.. 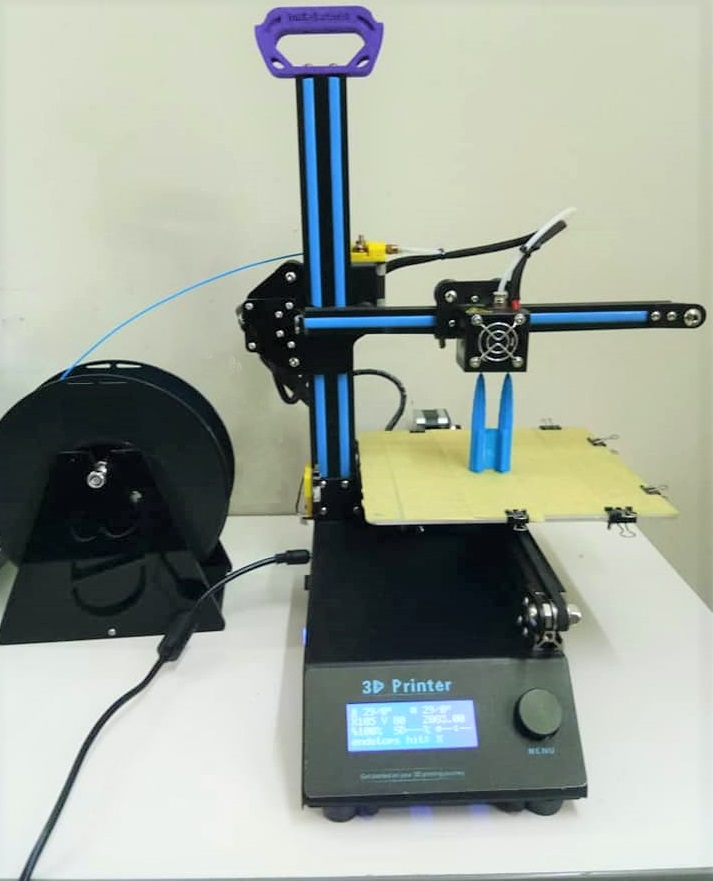 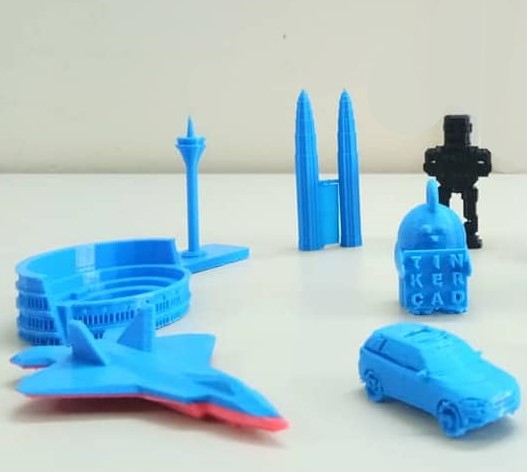 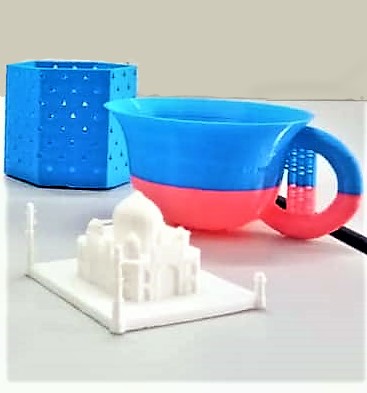 He was so delighted with the new norm, that he sat for hours with Ms Usha who patiently taught him how to use “Blender”.

Haziq's parents were aesthetic and very supportive of our initiative. They even bought him a computer of his own ! 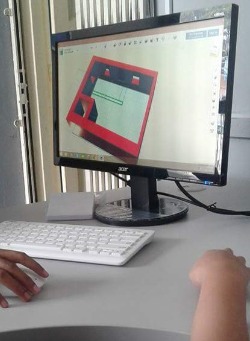 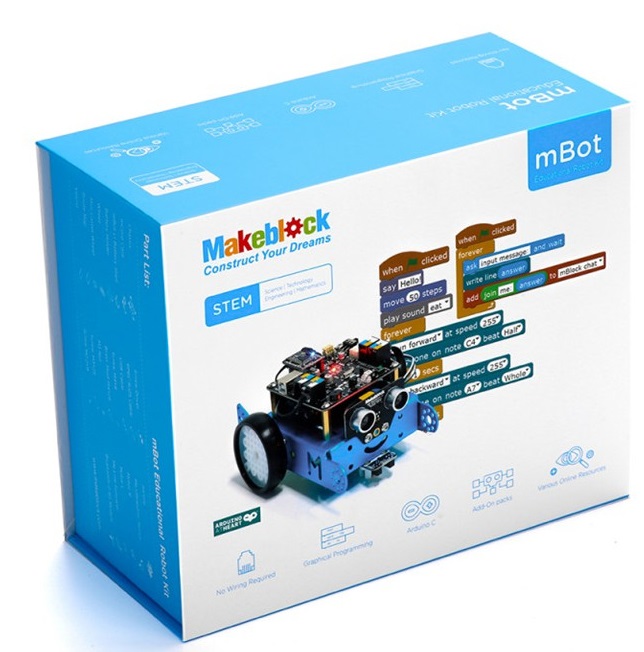 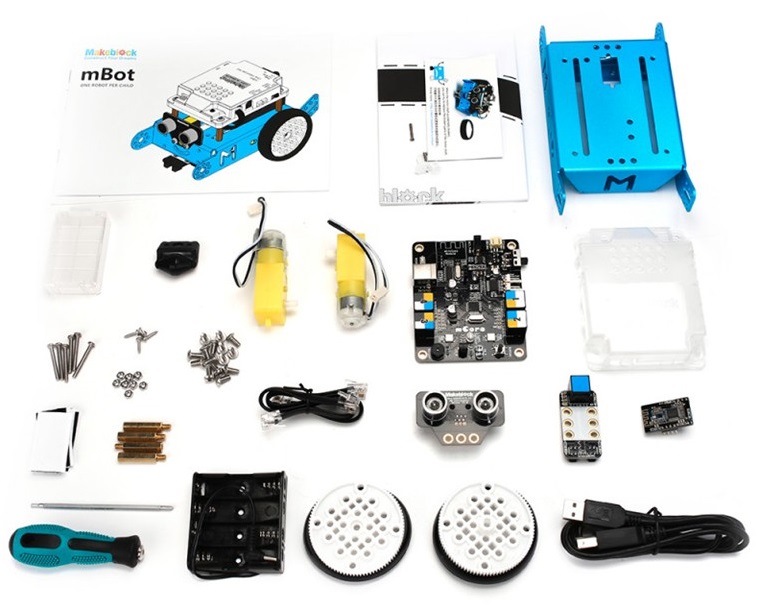 Ms Usha, then, gradually exposed him to Robotics and Animation.

Click on the image slider for more pictures and information.

Haziq demonstrated talent in the creative aspect of IT!

While I too have a great interest in designing, Haziq was soon far ahead of me …

All Haziq needed (but couldn't communicate) was to be given the opportunity to explore his innate talents ( which I believe he was always aware of ).

Blender is a 3D creation suite, a computer graphics software that can be used for various projects that include, making animated films, designing 3D models and making games and interactive 3D applications.

So that's the story of how Louis Center for Children with Special Need in Seremban begin providing IT courses to children & teens with autism.

Talented individuals with Autism worldwide are gradually getting employed...

This kind of talent in neurodiverse individuals was discovered as early as in 2013..

In 2013, SAP, a German Software Development giant, started a program called ”Autism at Work".  The program's focus is on employing candidates with Autism to join the SAP workforce. SAP, a pioneer in this movement, never looked back.

In an article for SAP News titled "Autism at Work: Encouraging Neurodiversity in the Workplace", Eva Woo mentioned that having a team member with Autism, can bring a whole new perspective to a project, resulting in a culture that is innovative within the team.

Neurodiversity is an understanding that not everyone is neurologically the same. Human beings have subtle variations in their neurological functioning. These differences should not be looked upon as a disorder but simply a difference.

This is a documentary that follows four individuals with an autism spectrum disorder (ASD) in their journey to find meaningful work and independence. They became part of IBM’s pilot program to hire and train individuals with ASD in IBM’s application testing and quality offering. This film demonstrates the importance of neurodiversity in the workplace, and the benefits it has not only on business, but on all of us.

Autism in the Workplace

In 2015, Microsoft launched it's ‘Autism Hiring Program’. Neil Barnett, the Director of Inclusive Hiring and Accessibility at Microsoft stated;

"Given that 80% of individuals on the autism spectrum are unemployed or underemployed, we knew there was an untapped pool of talented people who have the skills aligned to the work we are doing every day at Microsoft. "

Why do individuals with autism need a special hiring program?

Very often talented individuals with autism do not get hired, because they do not do to well at interviews. During the interview process, they may not maintain sufficient eye contact, seem to be abrupt when answering questions ( appearing to be aloof), be very anxious when dealing with a stranger or a new environment, thus not able to carry out a smooth back and forth conversation.

This video by CBS explains this well:

Since neurodiverce individuals are frequently misunderstood, leading to wasted talents, a number of tech companies have come out with a Special Program for hiring in place of the traditional interview.

Benefits of having a Neurodiverse Workforce

Hiring neurodiverse individuals not only benefits the employee but also the employer.

As Neil Barnett from Microsoft commented,

"We have seen great success hiring software engineers, data scientists and other roles across the company, working on products and services like Azure, Cortana, HoloLens, Microsoft IT, Office, Windows, Windows Store and Xbox."

Microsoft has been organizing an annual Summit called ‘Autism at Work’ which has attracted those companies that hire individuals on the spectrum, or are considering such a move. Representatives from universities, advocates and even government bodies also participate.

Among the goals of the summit include: finding jobs that match the undiscovered talents out there, exhibiting the work of this remarkably gifted group, educating employers or future employers on best practices in hiring and working with the neurodiverse workforce as well as raising public awareness on the untapped talent out there.

What is Louis Center doing for this neurodiverse individuals?

Speech Tips: Choose & Teach the Best Group of Words to your Child - Part 2

Speech Therapy Activity: How to Get your Child to Request for Toys-Part 4

Speech Tips: How to Choose the Right Words to Teach your Child - Part 1

Speech Tips: Choose & Teach the Best Group of Words to your Child - Part 2

Speech Therapy Activity: How to Get your Child to Request for Toys-Part 4

Speech Tips: How to Choose the Right Words to Teach your Child - Part 1

Speech Therapy Activity: How to Get your Child to Request for Toys-Part 3

Speech Therapy Activity: Teach your Child to use Action Verbs to Communicate-Part 5

Speech Therapy Activity: Teach your child to answer to WHERE questions-Intermediate Level

Speech Therapy Activity: Teach your Child to use Action Verbs to Communicate-Part 4

Speech Therapy Activity: Teach your child to answer to WHAT questions.

Speech Therapy Activity: How to Get your Child to Request for Toys-Part 2..

Speech Therapy Activity: Teach your Child to use Action Verbs to Communicate-Part 3

Speech Therapy Activity: Teach your Child to Request for her Toys..Part 1

Language or Communication Abilities that your 2 year old should have : When to consult a doctor...

Speech Therapy Activity: Teaching your Child to use Action Verbs to Communicate-Part 2

Language or Communication Abilities that your 1 year old should have : when to consult a doctor...

Speech Therapy Activity: Teaching your Child to use Action Verbs to Communicate-Part 1

Speech Therapy Activity: A Sure Way to Teach your little one to Pack His Schoolbag.

Academic Intervention: How to Teach your Child Number & Quantity Relationship?